A few notes on Boskone

Tyler Cowen wrote a book last year called "Create Your Own Economy," arguing that in such a vast, prosperous culture that most of us live in now, each of us has the option to essentially create our own culture to immerse ourselves in, using our iPods, computers, etc.

Any good-sized convention allows attendees to "create their own conventions." For example, I just got back from Boskone (Feb. 12-14, at the Westin Waterfront in downtown Boston), a regional convention that includes two writers I really admire, Charles Stross and Vernor Vinge, and I didn't attend a single panel or event that featured either of them. There were so many good panels, I had to make choices.

I haven't been to a convention in 10 years, but I had two particular reasons for wanting to to Boskone. One, I have been obsessed with rediscovering Roger Zelazny ever since I walked into the Poison Pen, a mystery bookstore in Scottsdale, Ariz., in March 2009 and found a copy of his new posthumous mystery, "The Dead Man's Brother." NESFA, the folks who put on Boskone, have been publishing a six-volume set of all of Zelazny's short fiction, all of his poetry and all of his articles that it could find. And I knew that NESFA would give the premiere performance of a Zelazny play, "Godson." 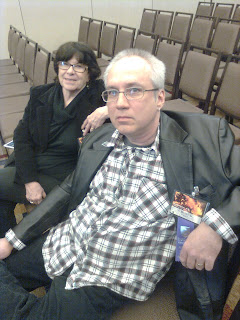 Then, too, I knew that my old friend Dr. F. Brett Cox and his wife, playwright and director Dr. Jeanne Beckwith, would be at the convention. Brett is a very old friend from my teen fan days, but I had not seen him in about a decade.

Brett is a professor, a writer and an academic with a big network of friends, and he turned out to be an excellent "native guide" to the convention in a region of the country where I don't know many people. While I was having dinner Friday with Ann, Brett and Jeanne, Brett waved over a friend to the table, Jim Kelly. As James Patrick Kelly, he's the author of a Golden Gryphon Press collection I have at home, "Think Like a Dinosaur," which is as good a single-author collection as I've ever read. When we got back to our room I told Ann that the guy Brett had flagged down might be the most talented writer at the convention.

Science fiction readers are really privileged in their ability to casually meet many of the best authors in the field. Boston is home to some of my favorite mainstream writers, but I don't know where I could go to be able to meet Elinor Lipman or Janice Weber.

During the NESFA party on Friday night to celebrate the group's latest small press books, such as the two new Poul Anderson volumes, I met Dr. Christopher Kovacs, one of the three editors of the NESFA's Zelazny project.

Kovacs told me that he had spent years assembling many boxes of all of the Zelazny material he could find. When he found out about the NESFA project, which originally was going to be a collection of selected works, he contacted the NESFA folks and told them they could assembly everything, if they wished. Kovacs also took on the job of annotating every work in the volumes and writing a biography, serialized in the six volumes, which covers Zelazny's life and literary career. 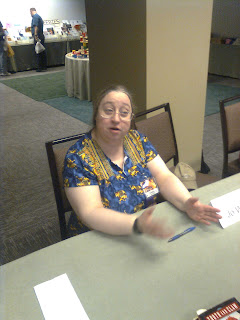 Jo Walton, at the autograph-signing table
I went to several interesting panels and discussions on Saturday, including the Jo Walton Kaffeeklatsch.

I had not realized that I was supposed to sign up for the Walton event, and when I showed up I was told there was no room for me at the table, but a participant generously got up to leave and I wa s able to take his place.

I very much admire Walton's "Small Change" trilogy, particularly the first two books, and I also had a chance to pass on some questions posed by my friend Julianne Chatelain. Walton told us that although she is from Wales, she thinks of hersel f as a Canadian writer, as she lives in Canada and has never seen any of her books published in Great Britain. She said that living in Canada gives her distance to write books in a British setting such as "Ha'Penny."

Walton, asked how her LIvejournal blog affects her writing, replied that she is not only a writer, she is a person, and she participates in Livejournal to keep up with her friends. Similarly, Walton asserts that she attends conventions as a fan, not as a writer seeking to promote her books, and said she often sits on panels as a reader rather than as a writer. 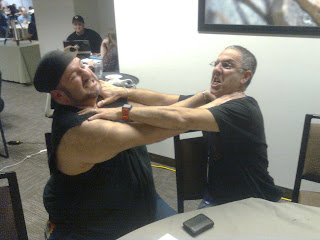 Eytan Kollin, left and his brother, Dani Kollin, work well together
I was wise to the rules of Kaffeeklatsch and properly signed up for the Kollin
brothers, the authors of "The Unincorporated Man," currently being weighed
for inclusion on the 2010 final ballot for the Prometheus Award, although in fact they drew fewer fans than Walton. They were both very nice and answered all of my questions.

I told them I was disappointed at finish their novel and not really knowing what their protagonist, Justin Cord, stood for as opposed to what he was against, and they advised me to read the sequel, which appears in May. I asked if their treatment of virtual reality was influenced by Robert Nozick's famous libertarian philosophy book, "Anarchy, the State and Utopia," which makes much the same arguments, and they said, nope, they weren't familiar with the book. I asked if a anyone had complained that the space elevator in New York City could not possibly be at that location, and they said no, they had not heard that criticism.

They also told me stories about their dealings with David Hartwell. They were terrified when Hartwell invited them to breakfast at a science fiction convention after reading their manuscript, not realizing that Hartwell would not have extended the invitation if he had not been interested in the book. In the original ending for "The Unincorporated Man," the hero, Justin Cord, was still trying to decide what to do at the end of the book, a conclusion the two authors described to me as Talmudic. Hartwell told them to forget that and to have Cord make up his mind, and made other changes which the two brothers acknowledge improved the book and its sequels.

I told them that Hartwell's work on Robert Heinlein's novels was probably good preparation for working with them, and that I liked to imagine an alternate universe in which Heinlein allowed Hartwell to edit the books. (Heinlein refused to allow his later books to actually be edited, to the obvious detriment of novels such as "Time Enough for Love.")

Saturday's highlights also included a performance of Zelazny's play "Godson." Jeanne Beckwith, who had served as a consultant for the staging, sat next to me and gave me a bit of commentary. I thought it was pretty good and would have been better if only the participants had had more time. 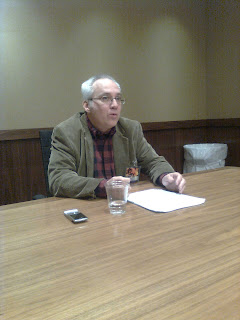 Brett reads from his novel
I attended little programming Sunday but did make it to Brett Cox's reading of his work in progress novel. It sounded really good, although I think Brett is going to regret reading it because all of his friends who heard it will no doubt pester him endlessly until he finishes the book. I certainly intend to.
Posted by Cleveland Okie (Tom Jackson) at 5:26 PM 4 comments:

Prometheus 'Hall of Fame' ballot announced
The Prometheus Award Hall of Fame ballot has been announced, and I nominated two of the four works that will be on the ballot: "Cryptonomicon" by Neal Stephenson and " 'Repent Harlequin!' Said the Ticktockman" by Harlan Ellison. Balloting will be decided by members of the Libertarian Futurist Society.
Here's the official press release, minus contact info at the end:
FOR IMMEDIATE RELEASE, January 30, 2010

The Libertarian Futurist Society’s Hall of Fame committee has selected four finalists for the 2010 award, from a field of 13 nominated works:

Final voting will take place in June and early July of 2010. All members of the Libertarian Futurist Society are eligible to vote. The winner will be announced after the counting of the votes; the award will be presented in a ceremony at the World Science Fiction Convention.

The Prometheus awards for Best Novel, Best Classic Fiction (Hall of Fame) and (occasional) Special awards honor outstanding science fiction/fantasy that explores the possibilities of a free future, champions human rights (including personal and economic liberty), dramatizes the perennial conflict between individuals and coercive governments, or critiques the tragic consequences of abuse of power--especially by the State.

The Prometheus Award, sponsored by the Libertarian Futurist Society (lfs.org), was established in 1979, making it one of the most enduring awards after the Nebula and Hugo awards, and oneof the oldest fan-based awards currently in sf. Presented annually since 1982 at the World Science Fiction Convention, the Prometheus Awards include a gold coin and plaque for each ofthe winners.

The Hall of Fame, established in 1983, focuses on older classic fiction, including novels, novellas, short stories, poems and plays. Past Hall of Fame award winners range from Robert Heinlein and Ayn Rand to Ray Bradbury and Ursula LeGuin.

Founded in 1982, the Libertarian Futurist Society sponsors the annual Prometheus Award and Prometheus Hall of Fame; publishes reviews, news and columns in the quarterly "Prometheus"; arranges annual awards ceremonies at the WorldCon; debates libertarian futurist issues (such as private space exploration); and provides fun and fellowship for libertarian SF fans.

A list of past winners of LFS awards can be found on the LFS web site at www.lfs.org.
Posted by Cleveland Okie (Tom Jackson) at 7:04 PM 1 comment: