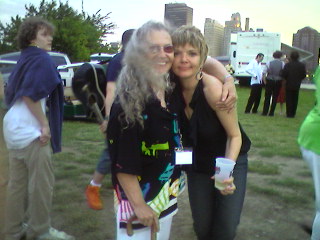 My wife and I went to a jazz festival in Toledo on June 18, mainly so that I could see my favorite jazz singer, Karrin Allyson. Unfortunately, it was a stormy day, and Karrin Allyson's performance had to be cut short after just six songs. The performance was supposed to also feature Nancy King, a jazz singer who performs with Allyson on Allyson's great new album, "Footprints," but the storm began before King could participate.

That was kind of a bummer, but there was a nice incident later. While the headliner, Al Jarreau, was performing, I noticed Karrin Allyson standing off to the side of the stage with another woman. I walked over to try to get a picture. I didn't know who Nancy King was until "Footprints" came out, but when I got my copy I looked King up on the Internet, and I noticed the woman next to Karrin looked like the picture I'd seen. She was closest to the fence I was behind, so I asked her, "Are you Nancy King?" She was, and when I explained how I'd figured out who she was, she asked, "Did you look at my web site?" I explained I'd just found out who she was but that I planned to track down her music, too. She suggested I pick up her new album with Fred Hersch, "Live at Jazz Standard."

It turned out my favorite music downloading site, eMusic, had "Live at the Jazz Standard," so I bought it. The same site also has the entire Karrin Allyson catalog.
Posted by Cleveland Okie (Tom Jackson) at 9:14 PM No comments: