I've been re-reading Philip Jose Farmer's "World of Tiers" books, one of his best-known series. I was a big Farmer fan in my youth. The re-reading was sparked by the discovery, in a used bookstore, that Farmer has published a sixth book in the series in the 1990s.

The books are THE MAKER OF UNIVERSES, THE GATES OF CREATION, A PRIVATE COSMOS, THE WALLS OF TERRA, THE LAVALITE WORLD and the book I found in the bookstore, MORE THAN FIRE. (For the purposes of this discussion, I'm treating RED ORC'S RAGE as a related book but not a part of the series.)

I've read the first two and I'm mostly done with the third book. The prose is creakier than I remember, and the stories are more improbable. For example, in A PRIVATE COSMOS, the hero, Kickaha, jumps on a stampeding herd of buffaloes, hopping from animal to animal. Anyone who has watched an experienced cowboy struggle to stay on top of a bull for only a few seconds at a rodeo will know how unlikely this is.

Still, the books are very imaginative and fast-moving, so I guess you have to take them as they are. The pocket universes created by Farmer's Lords (immortal humans employing "super science" are very well done. In fact, the settings are a high point of the books and enable Farmer to have fun with Plains Indian tribes, German knights, Viking marauders, Olmecs and other promising material. In some ways, these books seem to presage the Riverworld books, which I'll re-read in a few months.

Farmer is alive and well at age 87 and his Internet minions have created an official page for him that has a great deal of useful information, including a bibliography that quotes many of the reviews of his work.

A PRIVATE COSMOS features an introduction by Roger Zelazny, another of my old favorites, who does a nice appreciate of the first two "Tiers" books.

During the late 1970s, when I was a student at the University of Oklahoma, the campus science fiction club brought Zelazny in as a guest speaker, and I asked him about the introduction. He mentioned that Farmer, who he described as a bit of a hypochondriac, was worried that he would die before completing the "Tiers" series and had made Zelazy promise to finish the series, if necessary. Of course, the sad sequel to the story is that Zelazny has died since then, although it's a blessing we still have Farmer.
Posted by Cleveland Okie (Tom Jackson) at 1:59 PM 4 comments: 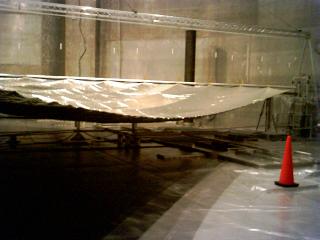 While my journalism career up in Cleveland has had its ups and downs, I've been fortunate to have two jobs in a row that allowed me to cover NASA, a science fiction fan's dream. Currently, I work for the Sandusky Register; part of my beat is covering NASA Plum Brook Station in Sandusky.

Plum Brook has the biggest vacuum chamber in the world, about 100 feet wide and 120 feet tall, and it's currently being used to test a prototype solar sail. A solar sail is "pushed" by sunlight and will be used someday to propel small, unmanned spacecraft.


Posted by Cleveland Okie (Tom Jackson) at 7:20 PM No comments:

I voted for the fiction categories for the Hugo Awards -- my normal process for keeping up with what's going on -- although this time I ran out of time before I could read most of the short fiction nominees. I did read all of the novels, however, so here is how my Hugo ballot looked, with a letter grade and a few comments:

(1) Jonathan Strange & Mr. Norrell, Susanna Clarke, A+. The best novel I've read in several years. Vivid and brilliant. (2) The Algebraist, Iain Banks, A. Very good far-future space opera. Perhaps a bit like Vernor Vinge, only better written. (3) Iron Sunrise, Charles Stross, A. Cyberpunk space opera. Stross is much better than I realized. Any of these three books would do the award credit, although it would be a shame if Clarke didn't win.

(4) River of Gods, Ian McDonald, B-. This novel about Indian circa 2050 is a good novel in many ways, but I couldn't take it to heart. For one thing, I was taken aback that McDonald dislikes Indians and Hinduism so much. (5) Iron Council, China Mieville, C+. Very competently done, but I thought it was boring. Everyone should read Perdido Street Station, though, which I thought was a wonderful novel.
Posted by Cleveland Okie (Tom Jackson) at 6:59 PM No comments:

As a longtime science fiction fan, I worry that many of the writers I love will be forgotten soon after their deaths. It's not as if I'm an antiquarian; I love many of the current writers, such as Bruce Sterling, Neal Stephenson and Kim Stanley Robinson. But I also worry about writers I've loved for years, such as Roger Zelazny and Jack Vance, being forgotten by readers in the 21st century. I went to a science fiction convention years ago where Darrell Schweitzer, a fan, editor and writer, talked about a panel that was devoted to Jack Williamson. It was a disaster, Schweitzer said. Few people at the convention appeared to know who Williamson was. (He's a famous old SF writer who wrote a wonderful horror-science fiction novel called "Darker Than You Think.")

One of my favorites, George Alec Effinger, died in 2002, and already there is little sign that he's remembered in Cleveland, the city of his birth. Effinger was expecially good as a short story writer, and there's a new collection, "George Alec Effinger Live! From Planet Earth," which collects several of his most famous stories but also includes any stories never collected in an Effinger anthology before.
Posted by Cleveland Okie (Tom Jackson) at 1:16 PM No comments: